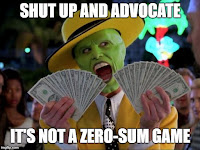 Once upon a time, the task of scientists was to understand nature. “Merchants of Light,” Francis Bacon called them. They were a community of knowledge-seekers who subjected hypotheses to experimental test, using what we now simply call “the scientific method.” Understanding nature, so the idea, would both satisfy human curiosity and better our lives.

Today, the task of scientists is no longer to understand nature. Instead, their task is to uphold an illusion of progress by wrapping incremental advances in false promise. Merchants they still are, all right. But now their job is not to bring enlightenment; it is to bring excitement.

Nowhere is this more obvious than with big science initiatives. Quantum computing, personalized medicine, artificial intelligence, simulated brains, mega-scale particle colliders, and everything nano and neuro: While all those fields have a hard scientific core that justifies some investment, the big bulk is empty headlines. Most of the money goes into producing papers whose only purpose is to create an appearance of relevance.

Sooner or later, those research-bubbles become unsustainable and burst. But with the current organization of research, more people brings more money brings more people. And so, the moment one bubble bursts, the next one is on the rise already.

The hype-cycle is self-sustaining: Scientists oversell the promise of their research and get funding. Higher education institutions take their share and deliver press releases to the media. The media, since there’s money to make, produce headlines about breakthrough insights. Politicians are pleased about the impact, talk about international competitiveness, and keep the money flowing.

Trouble is, the supposed breakthroughs rarely lead to tangible progress. Where are our quantum computers? Where are our custom cancer cures? Where are the nano-bots? And why do we still not know what dark matter is made of?

Most scientists are well aware their research floats on empty promise, but keep their mouths shut. I know this not just from my personal experience. I know this because it has been vividly, yet painfully, documented in a series of anonymous interviews with British and Australian scientists about their experience writing grant proposals. These interviews, conducted by Jennifer Chubb and Richard Watermeyer (published in Studies in Higher Education), made me weep:


“I will write my proposals which will have in the middle of them all this work, yeah but on the fringes will tell some untruths about what it might do because that’s the only way it’s going to get funded and you know I’ve got a job to do, and that’s the way I’ve got to do it. It’s a shame isn’t it?”
(UK, Professor)

“If you can find me a single academic who hasn’t had to bullshit or bluff or lie or embellish in order to get grants, then I will find you an academic who is in trouble with his Head of Department. If you don’t play the game, you don’t do well by your university. So anyone that’s so ethical that they won’t bend the rules in order to play the game is going to be in trouble, which is deplorable.”
(Australia, Professor)

“We’ll just find some way of disguising it, no we’ll come out of it alright, we always bloody do, it’s not that, it’s the moral tension it places people under.”
(UK, Professor)

“Then I’ve got this bit that’s tacked on... That might be sexy enough to get funded but I don’t believe in my heart that there’s any correlation whatsoever... There’s a risk that you end up tacking bits on for fear of the agenda and expectations when it’s not really where your heart is and so the project probably won’t be as strong.”
(Australia, Professor)

In other interviews, the researchers referred to their proposals as “virtually meaningless,” “made up stories” or “charades.” They felt sorry for their own situation. And then justified their behavior by the need to get funding.

Worse, the above quotes only document the tip of the iceberg. That’s because the people who survive in the current system are the ones most likely to be okay with the situation. This may be because they genuinely believe their field is as promising as they make it sound, or because they manage to excuse their behavior to themselves. Either way, the present selection criteria in science favor skilled salesmanship over objectivity. Need I say that this is not a good way to understand nature?

Tenure was supposed to remedy scientists’ conflict of interest between truth-seeking and economic survival. But tenure is now a rarity. Even the lucky ones who have it must continue to play nice, both to please their institution and keep the funding flowing. And honesty has become self-destructive. If you draw attention to shortcomings, if you debunk hype, if you question the promise of your own research area, you will be expelled from the community. A recent commenter on this blog summed it up like this:

If you doubt this, think about the following. I have laid out clearly why I do not think a bigger particle collider is currently a good investment. No one who understands the scientific and technological situation seriously disagrees with my argument; they merely disagree with the conclusions. This is fine with me. This is not the problem. I don’t expect everyone to agree with me.

But I also don’t expect everyone to disagree with me, and neither should you. So here is the puzzle: Why can you not find any expert, besides me, willing to publicly voice criticism on particle physics? Hint: It’s not because there is nothing to criticize.

And if you figured this one out, maybe you will understand why I say I cannot trust scientists any more. It’s a problem. It’s a problem in dire need of a solution.

This rant, was, for once, not brought on by a particle physicist, but by someone who works in quantum computing. Someone who complained to me that scientists are overselling the potential of their research, especially when it comes to large investments. Someone distraught, frustrated, disillusioned, and most of all, unsure what to do.

I understand that many of you cannot break the ranks without putting your jobs at risk. I do not – and will not – expect you to sacrifice a career you worked hard for; no one would be helped by this. But I want to remind you that you didn’t become a scientist just to shut up and advocate.
Sabine Hossenfelder at 10:08 AM
Share