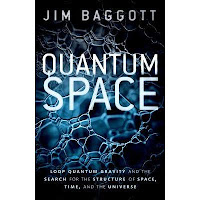 Quantum Space
Loop Quantum Gravity and the Search for the Structure of Space, Time, and the Universe
By Jim Baggott
Oxford University Press (January 22, 2019)


In his new book Quantum Space, Jim Baggott presents Loop Quantum Gravity (LQG) as the overlooked competitor of String Theory. He uses a chronological narrative that follows the lives of Lee Smolin and Carlo Rovelli. The book begins with their nascent interest in quantum gravity, continues with their formal education, their later collaboration, and, in the final chapters, follows them as their ways separate. Along with the personal stories, Baggott introduces background knowledge and lays out the scientific work.

Quantum Space is structured into three parts. The first part covers the basics necessary to understand the key ideas of Loop Quantum Gravity. Here, Baggott goes through the essentials of special relativity, general relativity, quantum mechanics, quantum field theory, and the standard model of particle physics. The second part lays out the development of Loop Quantum Gravity and the main features of the theory, notably the emphasis on background independence.

The third part is about recent applications, such as the graviton propagator, the calculation of black hole entropy, and the removal of the big bang singularity. You also find there Sundance Bilson-Thompson’s idea that elementary particles are braids in the spin-foam. In this last part, Baggott further includes Rovelli’s and Smolin’s ideas about the foundations of quantum mechanics, as well as Rovelli and Vidotto’s Planck Stars, and Smolin’s ideas about the reality of time and cosmological natural selection.

The book’s epilogue is an extended Q&A with Smolin and Rovelli and ends with mentioning the connections between String Theory and Loop Quantum Gravity (which I wrote about here).

Baggott writes very well and he expresses himself clearly, aided by about two dozen figures and a glossary. The book, however, requires some tolerance for technical terminology. While Baggott does an admirable job explaining advanced physics – such as Wilson loops, parallel transport, spinfoam, and renormalizability – and does not shy away from complex topics – such as the fermion doubling problem, the Wheeler-De-Witt equation, Shannon entropy, or extremal black holes – for a reader without prior knowledge in the field, this may be tough going.

We know from Baggott’s 2013 book “Farewell to Reality” that he is not fond of String Theory, and in Quantum Space, too, he does not hold back with criticism. On Edward Witten’s conjecture of M-theory, for example, he writes:


“This was a conjecture, not a theory…. But this was, nevertheless, more than enough to set the superstring bandwagon rolling even faster.”

In Quantum Space, Baggott also reprints Smolin’s diagnostic of the String Theory community, which asserts string theorists “tremendous self-confidence,” “group think,” “confirmation bias,” and “a complete disregard and disinterest in the opinions of anyone outside the group.”

Baggott further claims that the absence of new particles at the Large Hadron Collider is bad news for string theory*:


“Some argue that string theory is the tighter, more mathematically rigorous and consistent, better-defined structure. But a good deal of this consistency appears to have been imported through the assumption of supersymmetry, and with each survey published by the ATLAS or CMS detector collaborations at CERN’s Large Hadron Collider, the scientific case for supersymmetry weakens some more.”

I’d have some other minor points to quibble with, but given the enormous breadth of topics covered, I think Baggott’s blunders are few and sparse.

I must admit, however, that the structure of the book did not make a lot of sense to me. Baggott introduces a lot of topics that he later does not need and whose relevance to LQG escapes me. For example, he goes on about the standard model and the Higgs-mechanism in particular, but that doesn’t play any role later. He also spends quite some time on the interpretation of quantum mechanics, which isn’t actually necessary to understand Loop Quantum Gravity. I also don’t see what Lee Smolin’s cosmological natural selection has to do with anything. But these are stylistic issues.

The bigger issue I have with the book is that Baggott is as uncritical of Loop Quantum Gravity as he is critical of String Theory. There is not a mention in the book about the problem of recovering local Lorentz-invariance, an issue that has greatly bothered both Joe Polchinski and Jorge Pullin. Baggott presents Loop Quantum Cosmology (the LQG-based approach to understand the early universe) as testable but forgets to note that the predictions depend on an adjustable parameter, and also, it would be extremely hard to tell apart the LQG-based models from other models. And he does not, in balance, mention String Cosmology. He does not mention the problem with the supposed derivation of the black hole entropy by Bianchi and he does not mention the problems with Planck stars.

And if he had done a little digging, he’d have noticed that the group-think in LQG is as bad as it is in string theory.

In summary, Quantum Space is an excellent, non-technical, introduction to Loop Quantum Gravity that is chock-full with knowledge. It will, however, give you a rather uncritical view of the field.

* I explained here why the non-discovery of supersymmetric particles at the LHC has no relevance for string theory.
Sabine Hossenfelder at 3:35 AM
Share