Stephen Hawking dies at 76. What was he famous for? 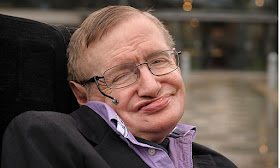 I woke up this morning to the sad news that Stephen Hawking has died. His 1988 book “A Brief History of Time” got me originally interested in physics, and I ended up writing both my diploma thesis and my PhD thesis about black holes. It is fair to say that without Hawking my life would have been an entirely different one.

While Hawking became “officially famous” with “A Brief History of Time,” among physicists he was more renowned for the singularity theorems. In his 1960s work together with Roger Penrose, Hawking proved that singularities form under quite general conditions in General Relativity, and they developed a mathematical framework to determine when these conditions are met.

Thanks to this seminal work, physicists understood that the singularities in General Relativity signal the theory's breakdown in regions of high energy-densities. In 1973, together with George Ellis, Hawking published the book “The Large Scale Structure of Space-Time” in which they laid out the mathematical treatment in detail. Still today it’s one of the most relevant references in the field.

A somewhat lesser known step in Hawking's career is that  already in 1971 he wrote one of the first papers on the analysis of gravitational wave signals. In this paper together with Gary Gibbons, the authors proposed a simple yet path-leading way to extract signals from the background noise.

Also Hawking’s – now famous – area theorem for black holes stemmed from this interest in gravitational waves, which is why the paper is titled “Gravitational Radiation from Colliding Black Holes.” This theorem shows that when two black hole horizons merge their total surface area can only increase. In that, the area of black hole horizons resembles the entropy of physical systems.

Only a few years later, in 1974, Hawking published a seminal paper in which he demonstrates that black holes give off thermal radiation, now referred to as “Hawking radiation.” This evaporation of black holes results in the black hole information loss paradox which is still unsolved today. Hawking’s work demonstrated clearly that the combination of General Relativity with the quantum field theories of the standard model spells trouble. Like the singularity theorems, it’s a result that doesn’t merely indicate, but prove that we need a theory of quantum gravity in order to consistently describe nature.

After this, Hawking tried several times to solve the riddle of black hole information loss that he posed himself, alas, unsuccessfully. It seems that the paradox he helped create finally outlived him.

Besides his scientific work, Hawking has been a master of science communication. In 1988, “A Brief History of Time” was a daring book about abstract ideas in a fringe area of theoretical physics. Hawking, to everybody’s surprise, proved that the public has an interest in esoteric problems like what happens if you fall into a black hole, what happed at the Big Bang, or whether god had any choice when he created the laws of nature.

Good bye, Stephen, and thank you.
Sabine Hossenfelder at 2:29 AM
Share