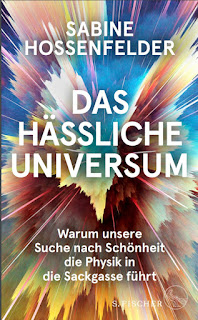 My US publisher has transferred the final manuscript to my German publisher and the translation is in the making. The Germans settled on the title “Das Hässliche Universum” (The Ugly Universe). They have come up with a cover image that leaves me uncertain whether it’s ugly or not which I think is brilliant.

New Scientist, not entirely coincidentally, had a feature last week titled “Welcome To The Uglyverse.” The article comes with an illustration showing the Grand Canyon clogged by an irregular polyhedron in deepest ultramarine. It looks like a glitch in the matrix, a mathematical tumor on nature’s cheek. Or maybe a resurrected povray dump file. Either way, it captures amazingly well how artificial the theoretical ideals of beauty are. It is also interesting that both the designer of the German cover and the designer of the New Scientist illustration chose lack of symmetry to represent ugliness.

The New Scientist feature was written by Daniel Cossins, who did an awesome job explaining what the absence of supersymmetric particles has to do with the mass of the Higgs and why that’s such a big deal now. It’s one of the topics that I explore in depth in my book. If you’re still trying to decide whether the book is for you, check out the New Scientist piece for context.

Speaking of images, the photographer came and photographed, so here is me gazing authorly into the distance. He asked me whether the universe is random. I said I don’t know
. 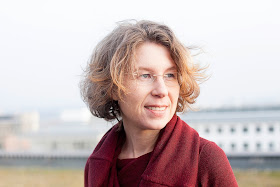