The annotated math of (almost) everything

Have you heard of the principle of least action? It’s the most important idea in physics, and it underlies everything. According to this principle, our reality is optimal in a mathematically exact way: it minimizes a function called the “action.” The universe that we find ourselves in is the one for which the action takes on the smallest value.

In quantum mechanics, reality isn’t quite that optimal. Quantum fields don’t have to decide on one specific configuration; they can do everything they want, and the action then quantifies the weight of each contribution. The sum of all these contributions – known as the path-integral – describes again what we observe.

This omniscient action has very little to do with “action” as in “action hero”. It’s simply an integral, usually denoted S, over another function, called the Lagrangian, usually denoted L. There’s a Lagrangian for the Standard Model and one for General Relativity. Taken together they encode the behavior of everything that we know of, except dark matter and quantum gravity.

The below figure gives you a rough idea how that works. 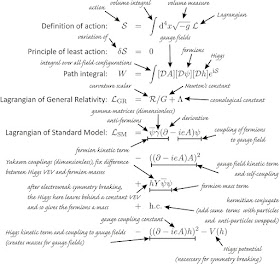 I originally made this figure for the appendix of my book, but later removed it. Yes, my editor is still optimistic the book will be published Spring 2018. The decision about this will fall in the next month or so, so stay tuned.
Sabine Hossenfelder at 10:01 AM
Share