No, physicists have not created “negative mass”

Thanks to BBC, I will now for several years get emails from know-it-alls who think physicists are idiots not to realize the expansion of the universe is caused by negative mass. Because that negative mass, you must know, has actually been created in the lab:

The Independent declares this turns physics “completely upside down”

And if you think that was crappy science journalism, The Telegraph goes so far to insists it’s got something to do with black holes 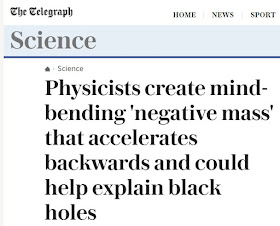 Not that they offer so much as a hint of an explanation what black holes have to do with anything.

These disastrous news items purport to summarize a paper that recently got published in Physics Review Letters, one of the top journals in the field:


This paper reports the results of an experiment in which the physicists created a condensate that behaves as if it has a negative effective mass.

The little word “effective” does not appear in the paper’s title – and not in the screaming headlines – but it is important. Physicists use the preamble “effective” to indicate something that is not fundamental but emergent, and the exact definition of such a term is often a matter of convention.

The effective mass is merely a handy mathematical quantity to describe the condensate’s behavior.

The condensate in question here is a supercooled cloud of about ten thousand Rubidium atoms. To derive its effective mass, you look at the dispersion relation – ie the relation between energy and momentum – of the condensate’s constituents, and take the second derivative of the energy with respect to the momentum. That thing you call the inverse effective mass. And yes, it can take on negative values.

If you plot the energy against the momentum, you can read off the regions of negative mass from the curvature of the resulting curve. It’s clear to see in Fig 1 of the paper, see below. I added the red arrow to point to the region where the effective mass is negative.

As to why that thing is called effective mass, I had to consult a friend, David Abergel, who works with cold atom gases. His best explanation is that it’s a “historical artefact.” And it’s not deep: It’s called an effective mass because in the usual non-relativistic limit E=p2/m, so if you take two derivatives of E with respect to p, you get the inverse mass. Then, if you do the same for any other relation between E and p you call the result an inverse effective mass.

It's a nomenclature that makes sense in context, but it probably doesn’t sound very headline-worthy:

In any case, if you use this definition, you can rewrite the equations of motion of the fluid. They then resemble the usual hydrodynamic equations with a term that contains the inverse effective mass multiplied by a force.

What this “negative mass” hence means is that if you release the condensate from a trapping potential that holds it in place, it will first start to run apart. And then no longer run apart. That pretty much sums up the paper.

The remaining force which the fluid acts against, it must be emphasized, is then not even an external force. It’s a force that comes from the quantum pressure of the fluid itself.

So here’s another accurate headline:

This is by no means to say that the result is uninteresting! Indeed, it’s pretty cool that this fluid self-limits its expansion thanks to long-range correlations which come from quantum effects. I’ll even admit that thinking of the behavior as if the fluid had a negative effective mass may be a useful interpretation. But that still doesn’t mean physicists have actually created negative mass.

And it has nothing to do with black holes, dark energy, wormholes, and the like. Trust me, physics is still upside up.
Sabine Hossenfelder at 7:04 AM
Share