Today our two beautiful girls are two years old! We have two cakes with two candles each and the apartment is full of balloons, awaiting the grandparents for a visit. 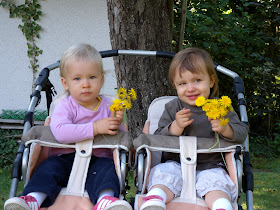 During the last year, Lara and Gloria have learned to walk and to run and to jump, to dance and to climb. Since a few weeks, they can climb out of their cribs, so time has come to upgrade the beds. We're browsing the IKEA catalog as I type, so to speak.  In their explorations, they have also suffered the occasional bruise or scratch, but luckily no major injuries. We too have gotten our share of bruises and scratches, mostly due to being hit with toys in a moment of inattentiveness.

For us, this year has been much more work than the first, because for most of the time we couldn't leave the kids unattended for even a second; they would inevitably tear something down, break something, spill something or topple over with the chair. It has gotten better during the last months. They know now fairly well what they can do safely, and they are careful not to touch anything that might be glass. We can let them walk around in the apartment now, so long as we recall to lock away the detergents and knives.

The girls are slow with learning to talk, though our pediatrician says this isn't so uncommon with twins. Gloria refers to herself as "Goo-kie" and to Lara as "Gah-kie" for reasons we don't know. They can now both eat by themselves, though one better doesn't leave them alone with the spaghetti.

When I contemplate the human brain, I am always torn between frustration about its shortcomings and amazement about how well it works. Watching the kids, what astonishes me most is how quickly and flawlessly they learn to identify objects. If you look at some picture book, the drawings are not usually too precise. Yet the kids have no problem to identify items from the books with our household items. And many items, such as most animals or large vehicles, they have never seen in reality, yet if they glimpse as much as a part of a tiger in an illustration, they'll announce "tee-ga". They also find Stefan's and my photos in the tiniest thumbnail versions from among dozens, instantly.

A source of amusement for us is how they construct causal and temporal relations. If they want to watch the washing machine for example, they sometimes pile laundry in front of it, not necessarily laundry that actually needs washing. If I forget to close the blinds for their afternoon nap, they'll scream and point at the window. When I come back from my morning run and the kids are already up, Lara will come and say "Mama. Ouh." and point to the shower. If they want Stefan to read them a book, they'll put a pillow on the floor where he usually sits. 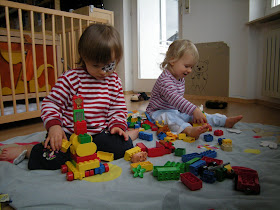 The next year will bring many changes for the kids and for us, not only because of the new beds but also because they will spend more time with other adults and other children. We haven't yet completely solved our daycare problem, but it looks like it will resolve soon. Now it's time to light the candles :o)
Sabine Hossenfelder at 7:46 AM
Share