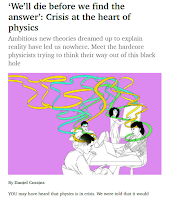 A recent issue of New Scientist has an article about the crisis in the foundations of physics titled “We’ll die before we find the answers.”

The article, written by Dan Cossins, is a hilarious account of a visit at Perimeter Institute. Cossins does a great job capturing the current atmosphere in the field which is one of confusion.

That the Large Hadron Collider so far hasn’t seen any fundamentally new particles besides the Higgs-boson is a big headache, getting bigger by the day. Most of the theorists who made the flawed predictions for new particles, eg supersymmetric partner particles, are now at a loss of what to do:


“Even those who forged the idea [of supersymmetry] are now calling into question the underlying assumption of “naturalness”, namely that the laws of nature ought to be plausible and coherent, rather than down to chance.

“We did learn something: we learned what is not the case,” says Savas Dimopoulos. A theorist at Stanford University in California, and one of the founders of supersymmetry, he happens to be visiting the Perimeter Institute while I am there. How do we judge what theories we should pursue? “Maybe we have to rethink our criteria,” he says.”

We meet Asimina Arvanitaki, the first woman to hold a research chair at the Perimeter Institute:


“There are people who think that, using just the power of our minds, we can understand what dark matter is, what quantum gravity is,” says Arvanitaki. “That’s not true. The only way forward is to have experiment and theory move in unison.”

Cossins also spoke with Niayesh Afshordi, who is somewhat further along in his analysis of the situation:


“For cosmologist Niayesh Afshordi, the thread that connects these botched embroideries is theorists’ tendency to devote themselves to whatever happens to be the trendiest idea. “It’s a bandwagon effect,” he says. He thinks it has a lot to do with the outsize influence of citations.

“The fight now is not to find a fundamental theory. It is to get noticed, and the easiest way to do that is get on board a bandwagon,” he says. “You get this feedback loop: the people who spend longer on the bandwagons get more citations, then more funding, and the cycle repeats.” For its critics, string theory is the ultimate expression of this.”

The article sounds eerily like an extract from my book. Except, I must admit, Cossins writes better than I do.

The star of the New Scientist article is Neil Turok, the current director of Perimeter Institute. Turok has been going around talking about “crisis” for some while and his cure for the crisis is… more Neil Turok. In a recent paper with Latham Boyle and Kieran Finn (PRL here), he proposed a new theory according to which our universe was created in a pair with an anti-universe.

I read this paper some while ago and didn’t find it all that terrible. At least it’s not obviously wrong, which is more than what can be said about some papers that make headlines. Though speculative, it’s a minimalistic idea that results in observable consequences. I was surprised it didn’t attract more media attention.

The calculation in the paper, however, has gaps, especially for what the earliest phase of the universe is concerned. And if the researchers find ways to fill those gaps, I would be afraid, they may end up in the all-too-common situation where they can pretty much predict everything and anything. So I am not terribly excited. Then again, I rarely am.

Let me end with a personal recollection. Neil Turok became director of Perimeter Institute in 2008. At that time I was the postdoc representative and as such had a lunch meeting with the incoming director. I asked him about his future plans. Listening to Turok, it became clear to me quickly that his term would mean the end of Perimeter Institute’s potential to make a difference.

Turok’s vision, in brief, was to make the place an internationally renowned research institution that attracts prestigious researchers. This all sounds well and fine until you realize that “renowned” and “prestigious” are assessments made by the rest of the research community. Presently these terms pretty much mean productivity and popularity.

The way I expressed my concern to Turok back then was to point out that if you couple to the heat bath you will approach the same temperature. Yeah, I have learned since then to express myself somewhat clearer. To rephrase this in normal-people speak, if you play by everybody else’s rules, you will make the same mistakes.

If you want to make a difference, you must be willing to accept that people ridicule you, criticize you, and shun you. Turok wasn’t prepared for any of this. It had not even crossed his mind.

Ten years on, I am afraid to say that what happened is exactly what I expected. Research at Perimeter Institute today is largely “more of the same.” Besides papers, not much has come out of it. But it surely sounds like they are having fun.
Sabine Hossenfelder at 8:56 AM
Share